Use the headings above to navigate the Site.

Scroll down this page for the latest Blogs.

Todays meeting centred around the SAW conference which was held virtually room 19th to 21st March 2021. Those who joined the conference provided feedback on the workshops they  had attended. Congratulations to Kate who received third place for the under sevens competition for her entry called 'Socks' which she read out to there group at the meeting. Another wonderful piece from Kate. John S received commended for his entry in the general novel category entitled  'Love Amy' well done John.

The group group's next meeting will be on the 13th April following the Easter break.

Morag delivered her Workshop on Memoir to the group.

She had used ideas from Brian Whittinghame’s workshop with us, Catherine Simpson who did a SAW workshop in 2018. ( Scottish Book Trust} And a four page article in the March 2020 edition of Myslexia by Caroline Sanderson ( publisher and Director of the Bookseller)

She talked about the fact that the last five or six years has seen a surge in the  writing the writing of memoir by ‘ordinary’ people  before this you had to be a celebrity or someone who already had a certain literary reputation. Myslexia doing a monthly pitch on memoir

Morag advised that writing memoir can be a minefield  as you  tend to be writing about dealing with a hard hurtful experience.

Depression, schizophrenia, a mother with autism, a brother in a persistent vegetative state,  breakdowns in relationships  leading to the expression  misery memoirs. Can cause upset for the writer and those he/she writes about.

Theme today something about a figure from your  childhood, adolescence.  Can be mother, father, a grandparent, an aunt or uncle, neighbour. The idea is to keep our focus on our relationship with that person, but you might find that doesn’t work for you and that you decide to change the person.  That’s fine!

Morag has asked the group to write a piece of 500 words on anything  to do with memoir for our meeting on 13th April.

At Tuesday's meeting we received the results from the 'Black Lives Matter" article, adjudicated by Rosanna. She awarded a first, second and third from the 10 entries submitted. First place was awarded to Kate her article was entitled 'A Scottish Slave' congratulations to Kate who retains the Quaich trophy for the second year running all done. Second place was Morag with 'Still a Debate' and third place was John H with 'The Big Friendly'. The group heard the readings from all the group and the excellent critiques from Rosanna.

Next week Morag will host the workshop on Memoir...The Way We Were and she reminded the group to prepare by reading someone's memoirs or an auto biography.

Our meeting on Tuesday had an array of short stories from the group where we had several readings and feedback, Christina's piece was entitled 'Written Off, John H 'Stuff', Hilary 'Otto and Friend, Brian 'A Train of Thought', Morag 'To Have and to Hold', Rob 'Pride and Prejudice', Kate 'Loaves and Fishes' and Lorna its 'Silver Linings'.

Next weeks meeting will have the adjudication from Rosanna on 'The Black Lives Matter' article where there were 10 submissions. Sandra reminded the group that she is happy to receive our submissions for the forthcoming anthology. Morag will hold her workshop on 16th March 'Memoir...The Way We Were' and encouraged the group to be prepared e.g. read an autobiography.

Our meeting held on 16/02/21 heard contributions based on the women's short story 'love Conquers All'. There was a variety of readings from the group including Kate's 'Perfect Day', Christina's 'At the Cinema', Brian with 'United We Stand', Morag 'Over the Sea', Hilary with the amazing title 'There is no Cleopatra or Marc Anthony living here', Rob also gave an interesting reading entitled 'The Yellow Rose of The Rhonda', Lorna, Joan and Sandra's were under the title of 'love Conquers all. John S delivered his monologue 'Caitlin'. His panto dame monologue 'It's Behind You' has been performed by The Maltby Drama Club available on Facebook where there has currently been 4,900 views!!

There was discussion on where we should go for our 'picnic in there park' outing on the 20th of April, this will be of course dependent on whether the lockdown and travel restrictions have eased. Pollock Park and Bellahouston Park have been suggested as possible venues...watch this space.

The meeting held this Tuesday 23rd February was contributions from our open manuscripts. Hilary opened the readings with the next chapter from her sci fi novel, John read 'Terms and Conditions Apply', Joan 'All Change', Rob 'Next Stop Fort Laramie', Morag gave us a Christmas poem 'Back to Basics', Kate read her Habi poem 'Asylum Seekers', Donnie gave his a synopsis on 'The Falkirk' story with more to come next week, Christina read two pieces from a story with 4 different elements of the school curriculum at todays meeting we heard 'Geometry' and 'Literature' Brian's offering was 'Lent and Reflection' and John S concluded with a reading from a crime novel that he is currently working on.

Sandra's latest novel 'Before the Storm' is due for publication on 18th March 21. There will be a virtual book launch on 2nd April. 200 tickets will be available. Sandra will also be a speaker at the Paisley Book Festival on Thursday 25th February at 7.00pm.

The group meeting this week held on 9th February, centred on open manuscripts and there were many contributions from the members who attended. We had several readings from the exercise set at last week's meeting on the theme of receiving a phone call and although it is a wrong number the conversation is carried on. Other OMs included Joan's re-write of 'There first Lockdown', Brian gave us his his version of Joe Biden's Inaugural Speech. Hilary read the the next chapter from her Sci Fi Story.  Next week's theme is 1000 word women's short story 'Love Conquers All'. 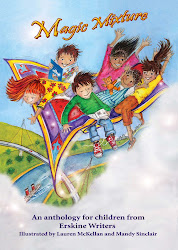